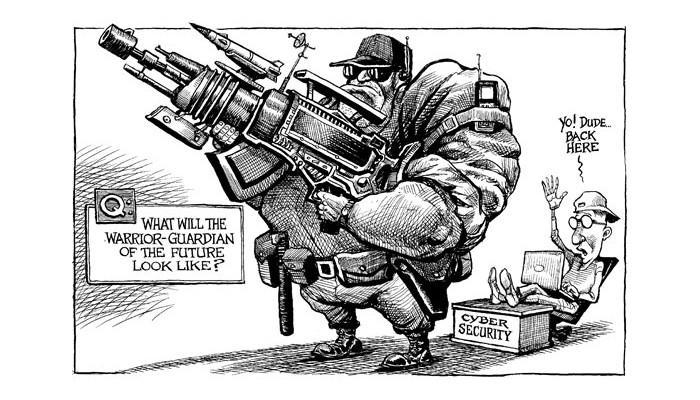 States are increasingly launching non-lethal attacks against an enemy’s information systems and people – this is the rise of information warfare. Not only is it a geopolitical “game”, states are also attacking their own people for maintaining dominance, corporations do to get you to buy their stuff, political groups are attacking other political groups for believing in something else, and individuals take out their frustration on others.

Information warfare is closely linked to psychological warfare. In the big, and often also, in the small. Therefor researching the patterns of psychological warfare is easy. One can simply observe them in oneself and in ones own circles. For example, the myth of technological sufficiency that many depending on the system seem to believe in, identifies technology as the critical factor to solve any issue. Yet more technology is not likely to end any large scale (political) warfare.

The new black bag is digital

Over the past decade specially-trained CIA clandestine operators have mounted over one hundred extremely sensitive black bag jobs designed to penetrate foreign government and military communications and computer systems, as well as the computer systems of some of the world’s largest foreign multinational corporations. Spyware software has been secretly planted in computer servers; secure telephone lines have been bugged; fiber optic cables, data switching centres and telephone exchanges have been tapped; and computer backup tapes and disks have been stolen or surreptitiously copied in these operations. In other words, the CIA has become instrumental in setting up the shadowy surveillance dragnet that has now been thrown into public view. Sources within the U.S. intelligence community confirm that since 9/11, CIA clandestine operations have given the NSA access to a number of new and critically important targets around the world, especially in China and elsewhere in East Asia, as well as the Middle East, the Near East, and South Asia. ~ The CIA’s New Black Bag Is Digital, 2013

And it is not just the CIA, it resembles a panopticon in which all previously colonising countries are involved, to secure their continuity, intake of oil and rare earth elements, enhanced power and authority, status pursuit of ideological goals and objectives and general growth of their agency, marginalising entire populations of nation states with the assistance of local elites in the process.

“All warfare is based on deception. Hence, when we are able to attack, we must seem unable; when using our forces, we must appear inactive; when we are near, we must make the enemy believe that we are far away; when far away, we must make him believe we are near.” ~ Sixth generation warfare: manipulating space and time